Last week, I had the good fortune to be asked to participate in the Imaging in Ophthalmology Workshop hosted by the Digital Imaging Institute. The annual workshop is geared toward ophthalmologists and ophthalmic photographers. Special thanks to Mark Maio for making this possible.

Photographers Randy Van Duinen, Christopher Bloor, and I were asked to help out with the non-medical side of the conference: teaching Photoshop and Lightroom, and leading daily photo shoots. Here are some images I was pleased to come away with.

It started on Tuesday, September 11. Got up at 5:15 a.m. because . . .  well, because that's what you do when you're going to drive 30 minutes to walk to the place where you want to catch the sunrise. Said sunrise turned out to be dull, not dramatic, because of the clouds and smoke from the forest fires south and west of here. Anyway, four hours later, we drove back to the lodge and I was hopeful I got a few shots. Here's a sampling from that first morning. (Comments welcome.)

I was told that when the weather is clear, the peaks of the mountains "light up" when the sun comes up behind you. Even with the haze, though, this was pretty spectacular stuff. A couple hundred yards farther down: 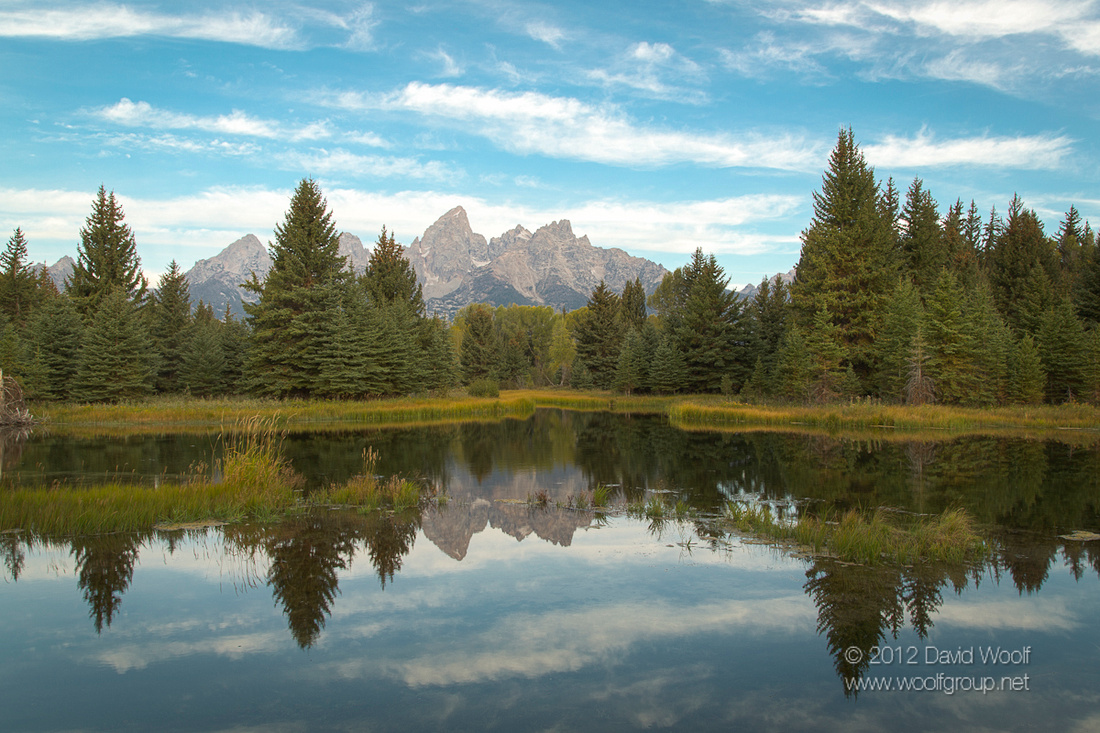 Driving farther south, we came to the iconic Mormon barns, among the most photographed sites at Grand Teton: 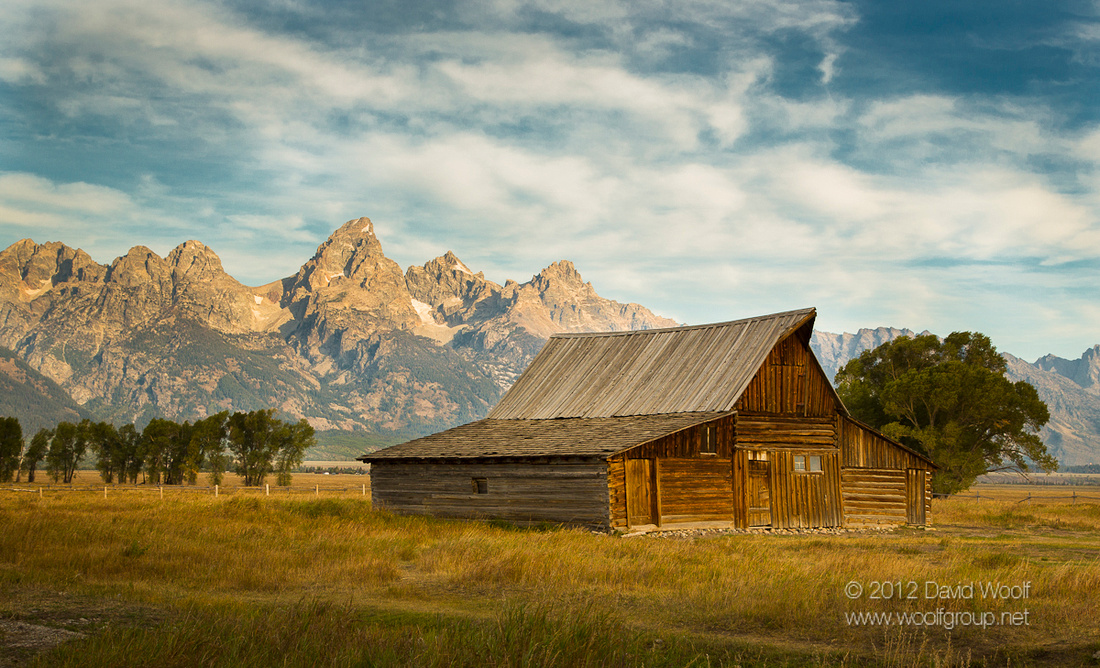 Same area, opposite direction. The haze is smoke.

We were driving down the road and all traffic was stopped for about 15 minutes while a large herd of buffalo leisurely crossed the road. My favorite was this mom and calf. 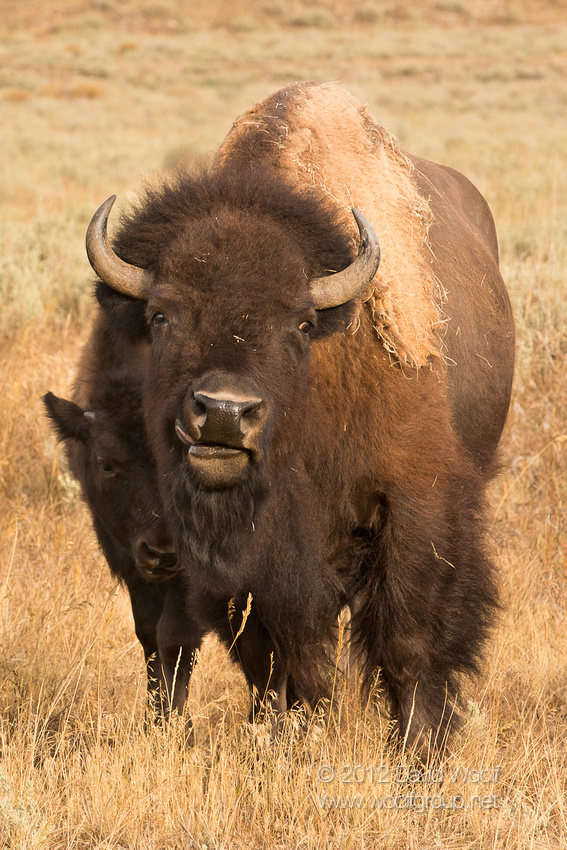 This bull stood in front of the white car for a good 6-8 minutes. That was interesting enough, but then we saw the driver get out of the car to take pictures. Totally nuts. We wondered whether we should have our hands on our phones ready to dial 911. Buffalo can charge at 30+ mph. 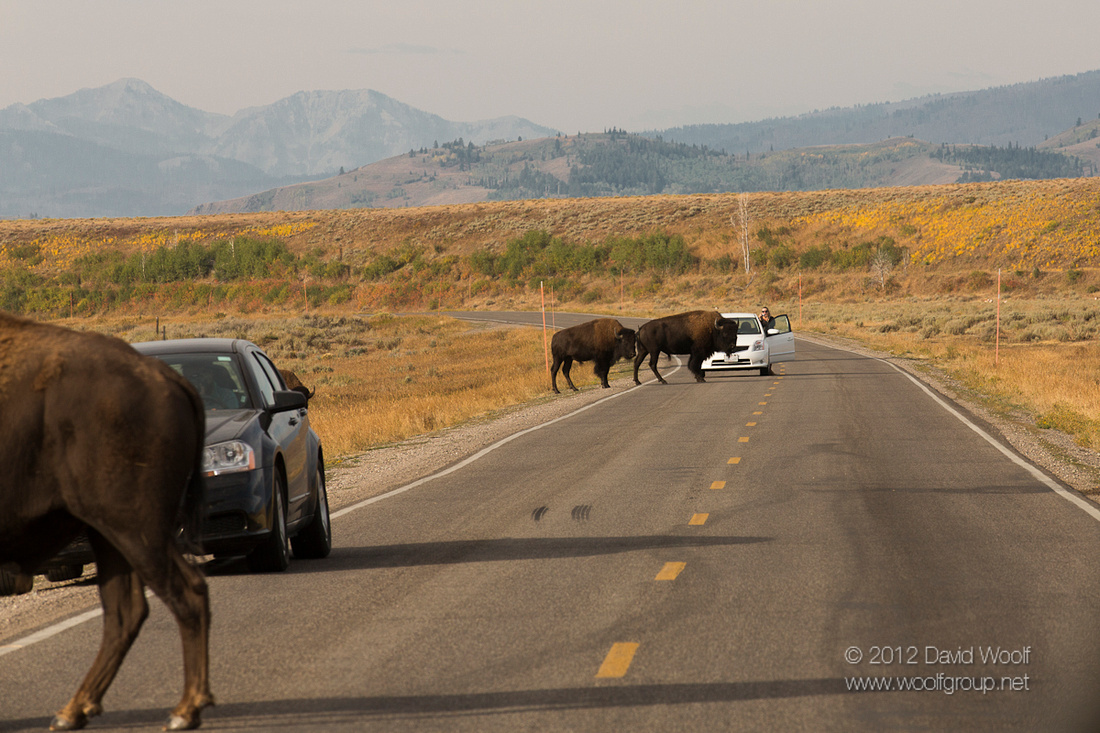 The bull closer to the car moved on. Here's a shot of the second bull - note the attitude. 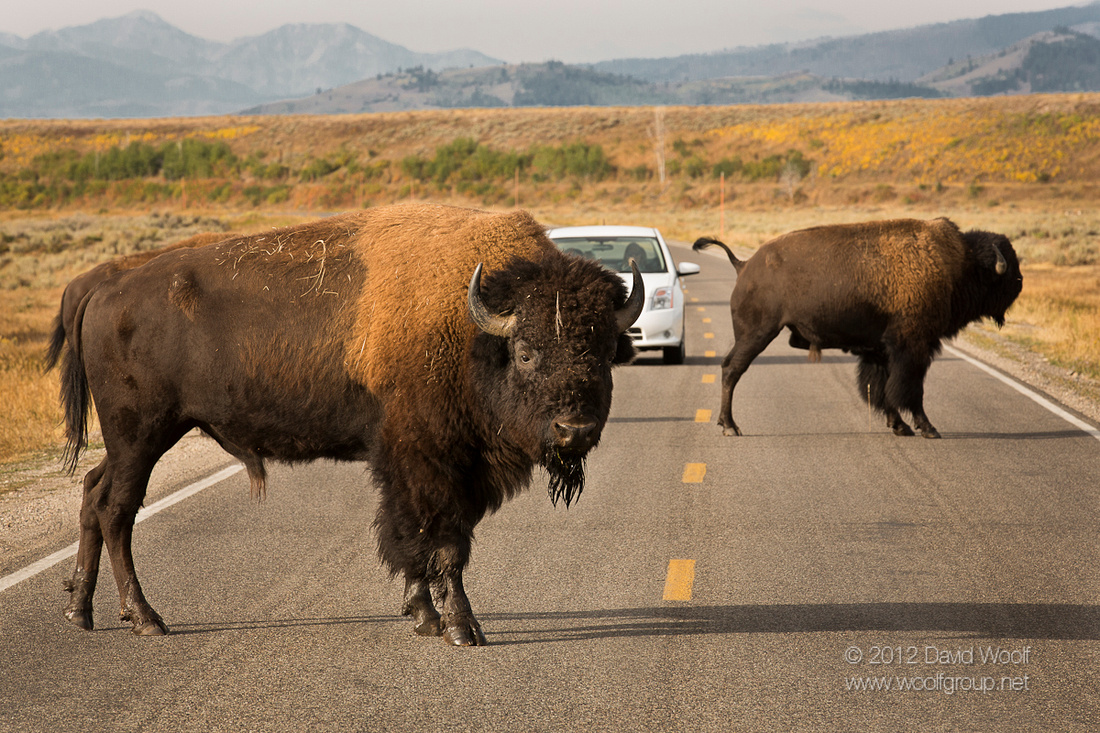 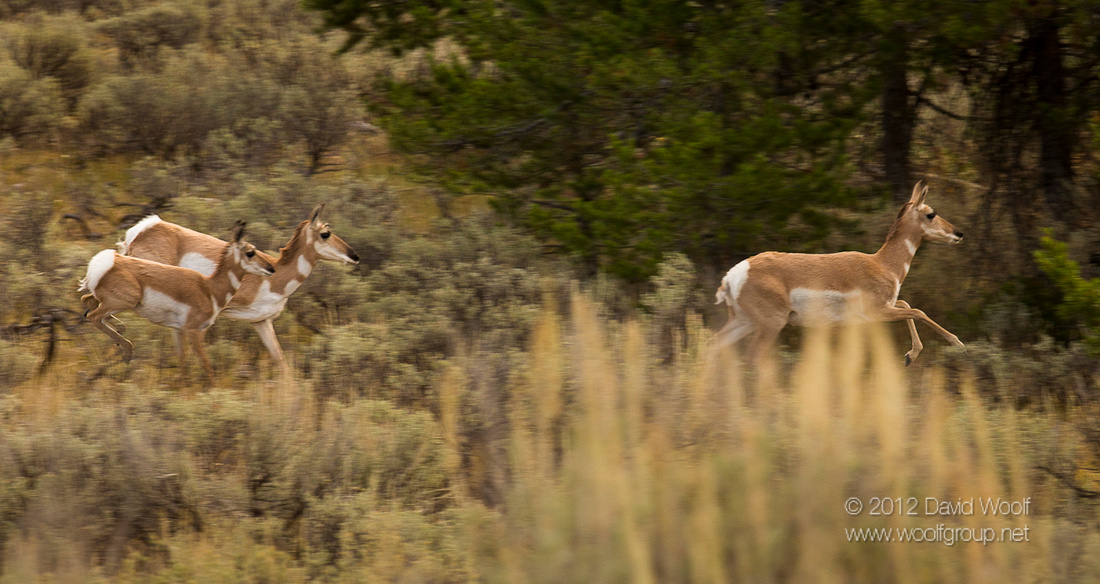 Day Two. The smoke had gotten much worse. We thought it was from a small fire in Jackson, 25 miles to the south, but learned it was from a large (250,000 acre) fire in Idaho. We did get lucky and got to watch a female elk snacking a bit. 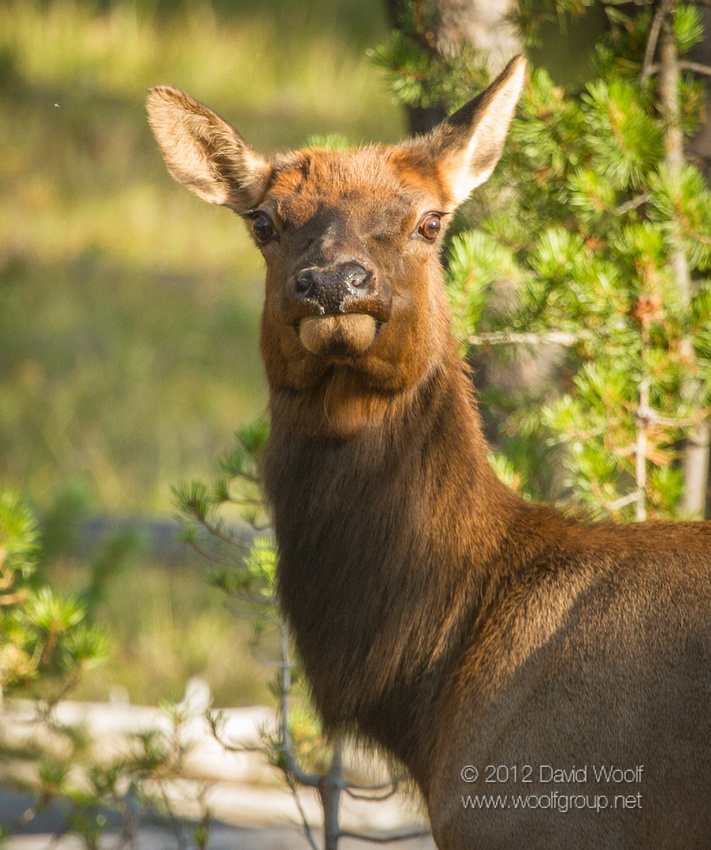 The shooting was unremarkable until we came upon a huge king elk, standing on the side of the road with two females. The top of his antlers must have been 9 feet tall. I pulled over as soon as I could, about 100 feet up the road. This would be good time to mention how the system works: You see an animal, you pull over to the shoulder and quietly proceed to observe or photograph. Often, you pull over just because a bunch of other people are pulled over and you assume they're looking at something interesting.

I suppose the person behind me was in a hurry (the park is a really bad place to be in a hurry). When I slowly opened my door, the car sped around me and laid on his horn. The elk took off like a bullet. Unbelievable.

Though the smoke interfered with our original plan, it added some drama to the sunset that day. 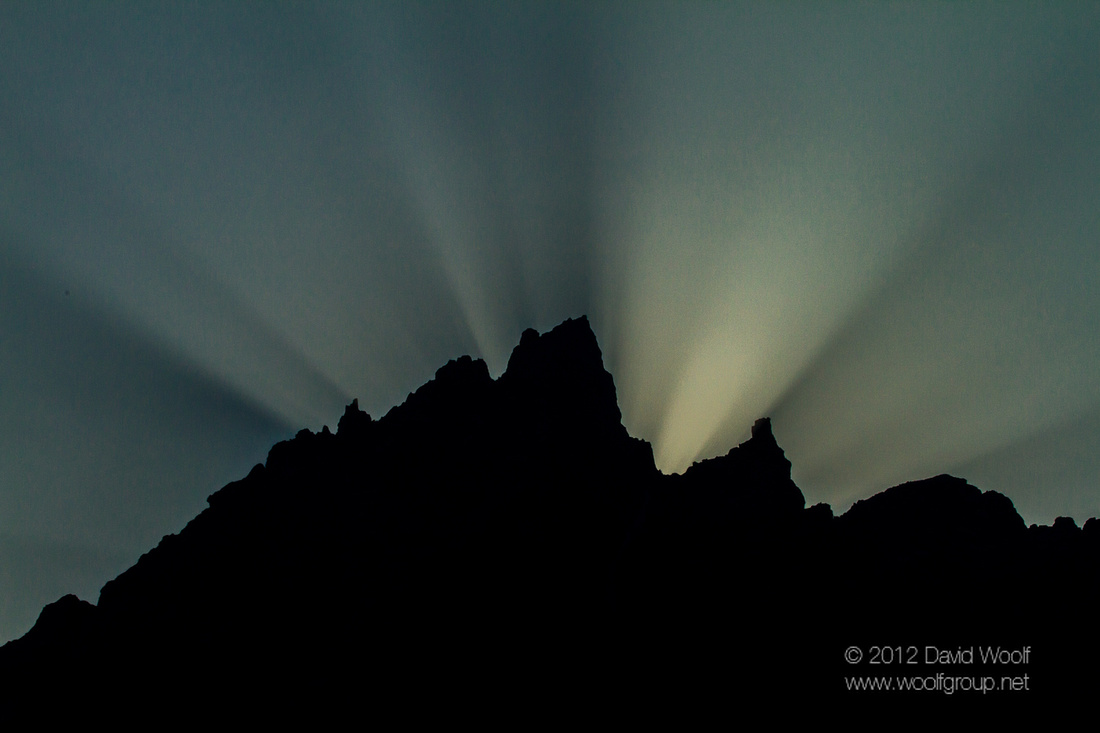 And a little farther down the road, the sun was peeking through the peaks. 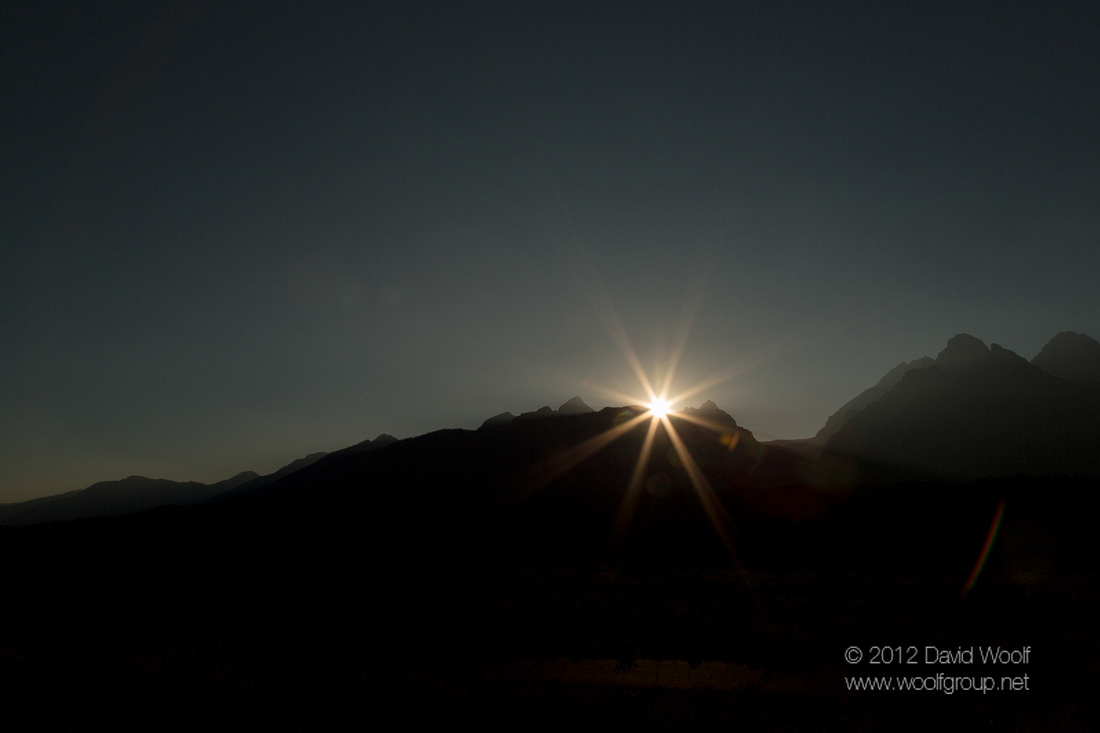 The only moose I saw on the trip. This lady was taking a drink at dusk. 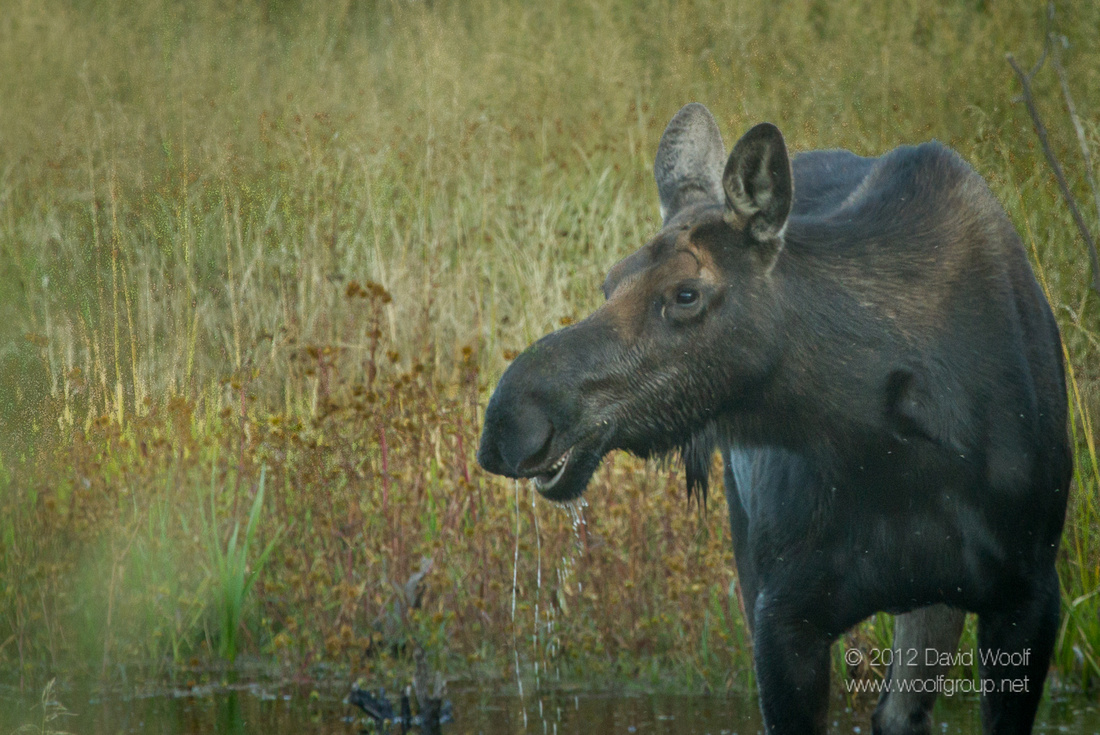 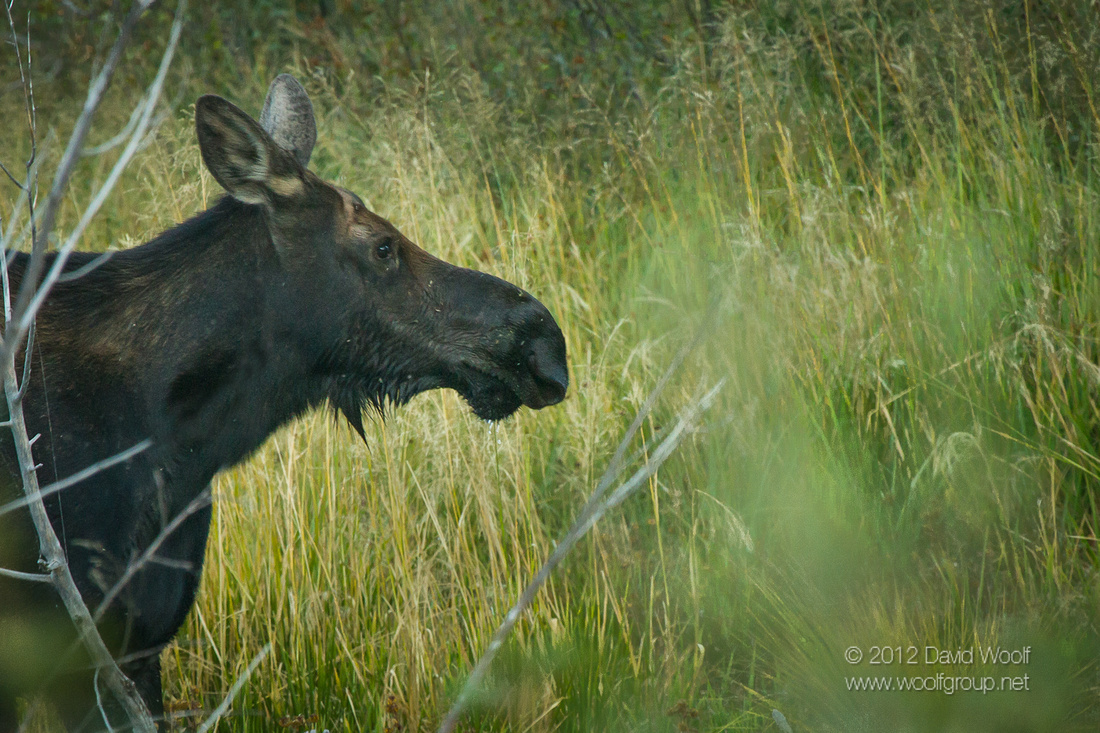 That evening, Randy invited a group of us to go do some light painting at the Church of the Transfiguration, a one-room chapel at the south end of the park. Light painting is photography that takes place in the dark. You open the camera's shutter and shine a flashlight on the object you're shooting. The shot below is a result of several exposures - church, grass, trees, fence, and stars. Put it all together in Photoshop; piece of cake. If you look to the left above the church, you can see the big dipper. 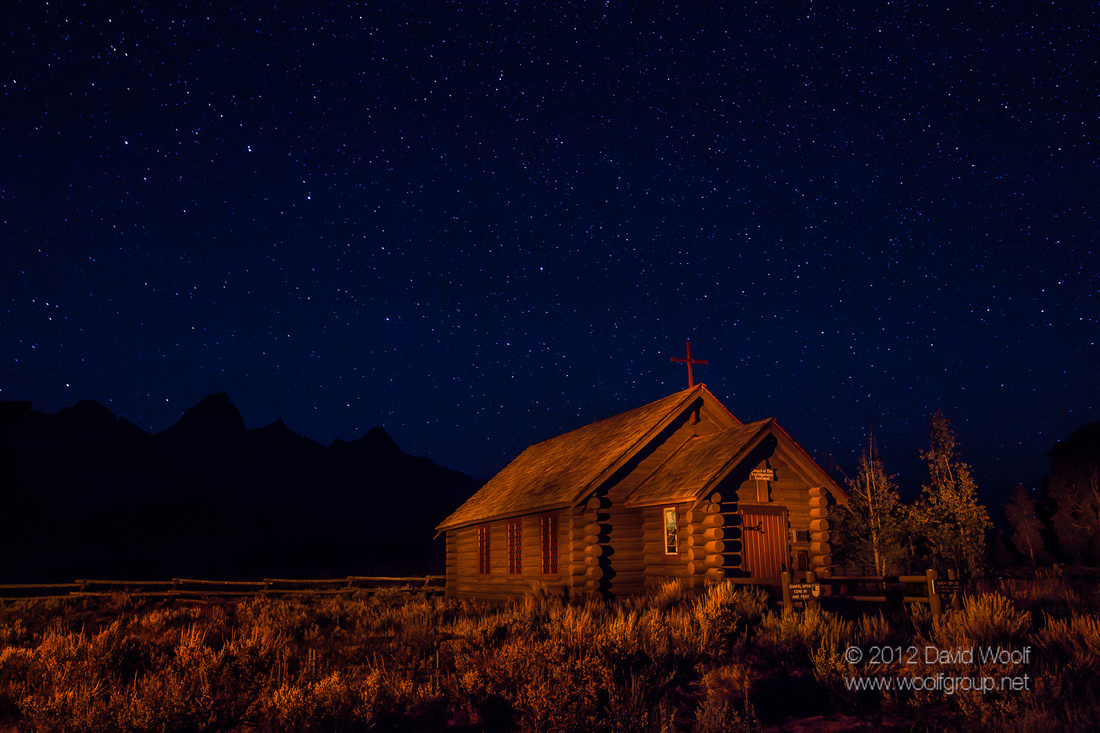 Friday, we shot all day at Yellowstone. (No, I don't have a picture of Old Faithful.) We first visited two geyser basins, which were remarkable for their variety of colors and patterns. There are strong warnings to stay on the wooden walkway. People who get off the path at these places have been killed by steam or chemical burns. The first was Black Sand Basin. 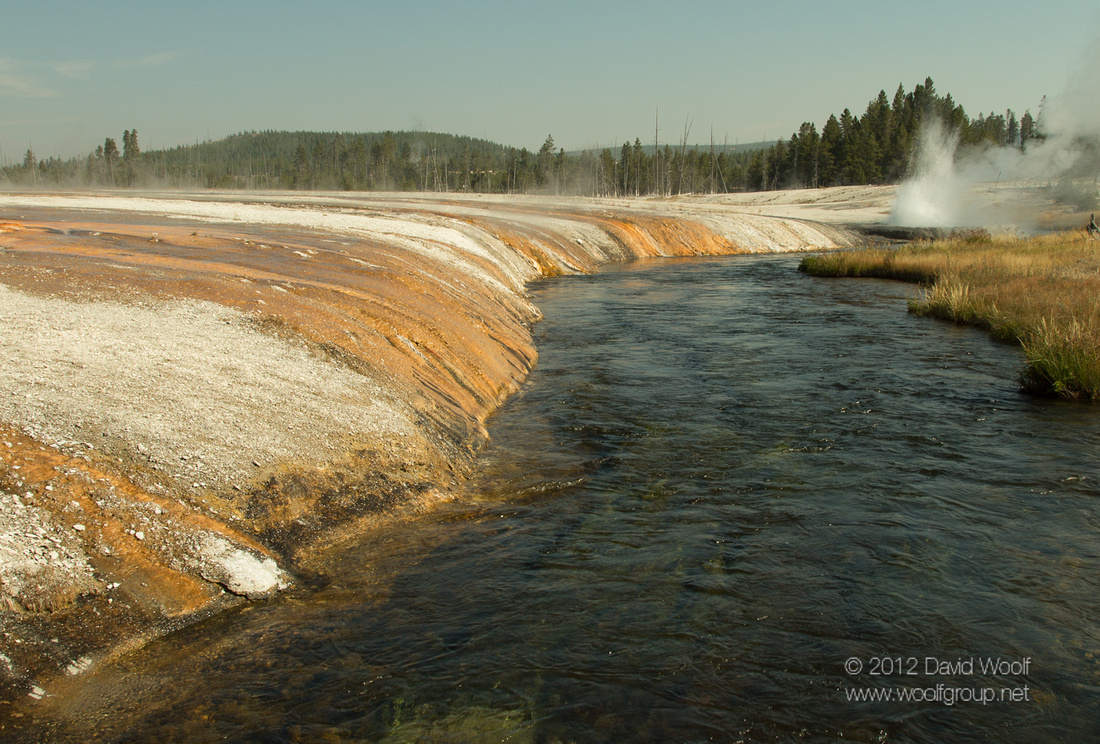 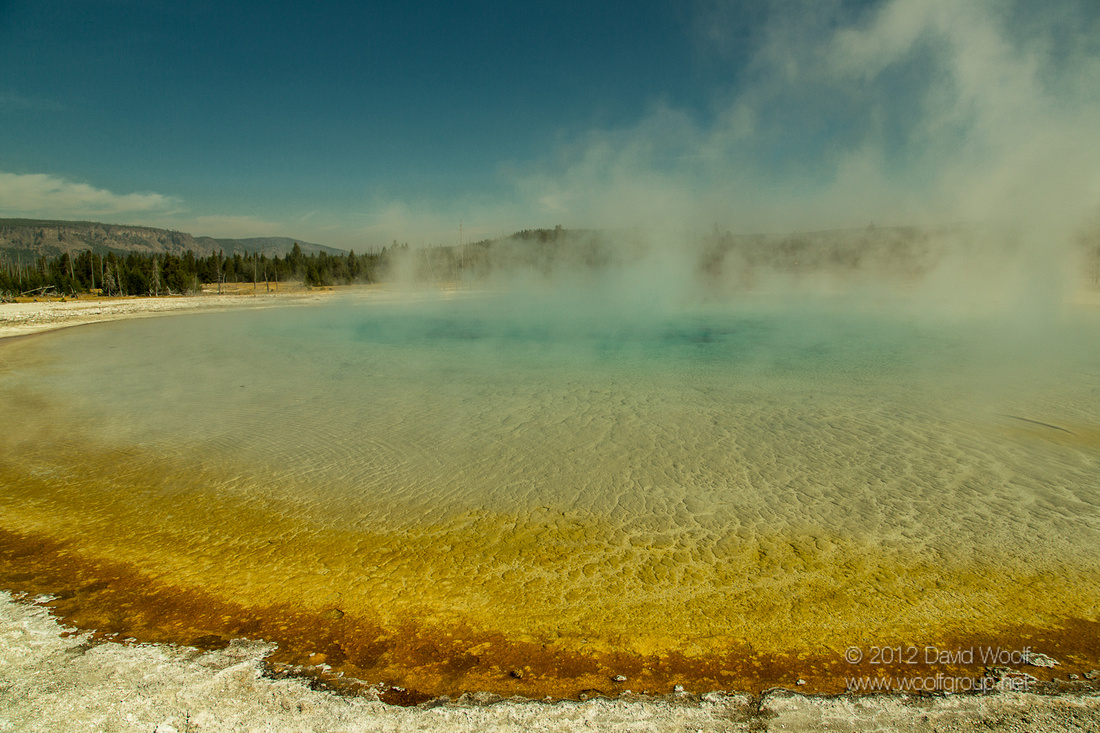 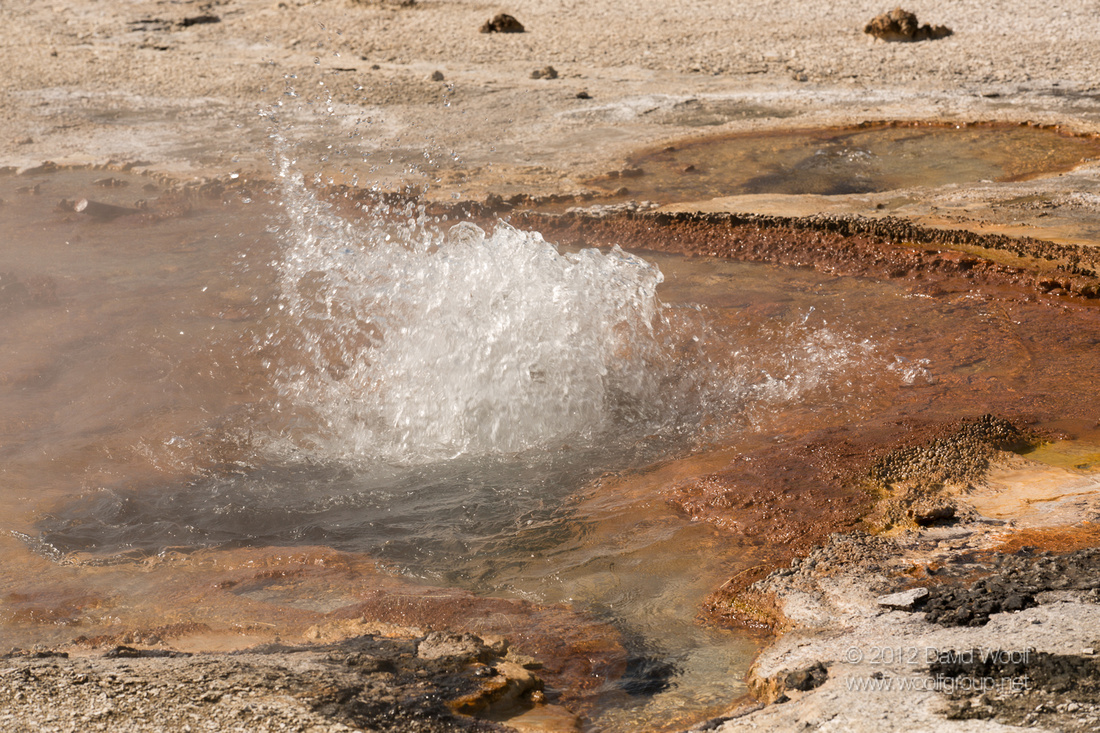 The following four shots were all taken in the same pool, fairly close together. 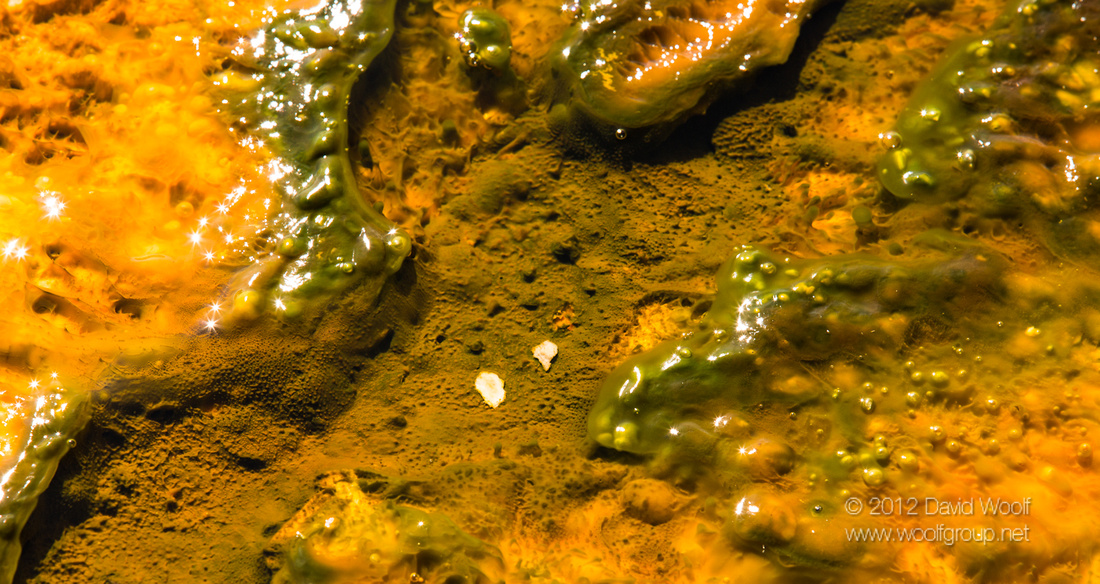 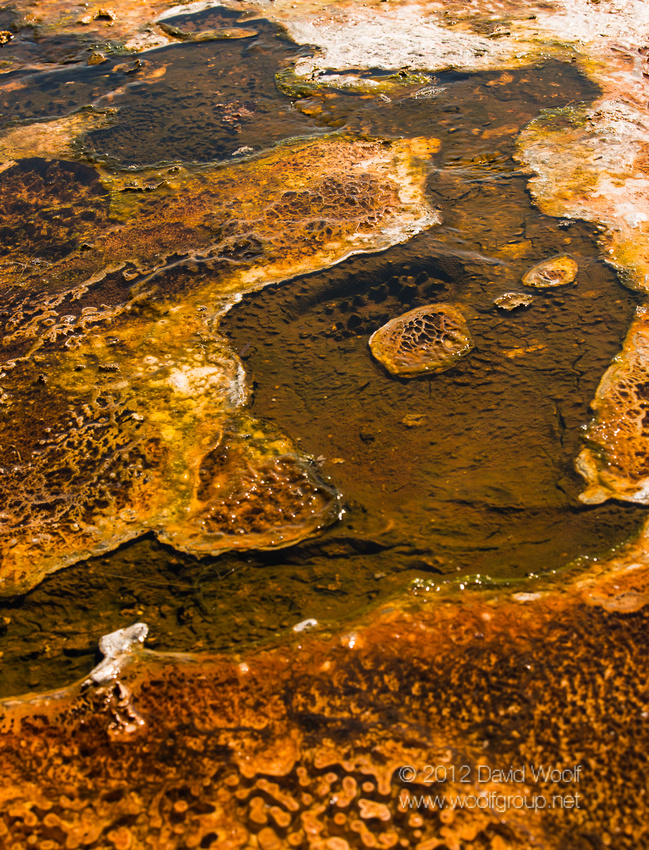 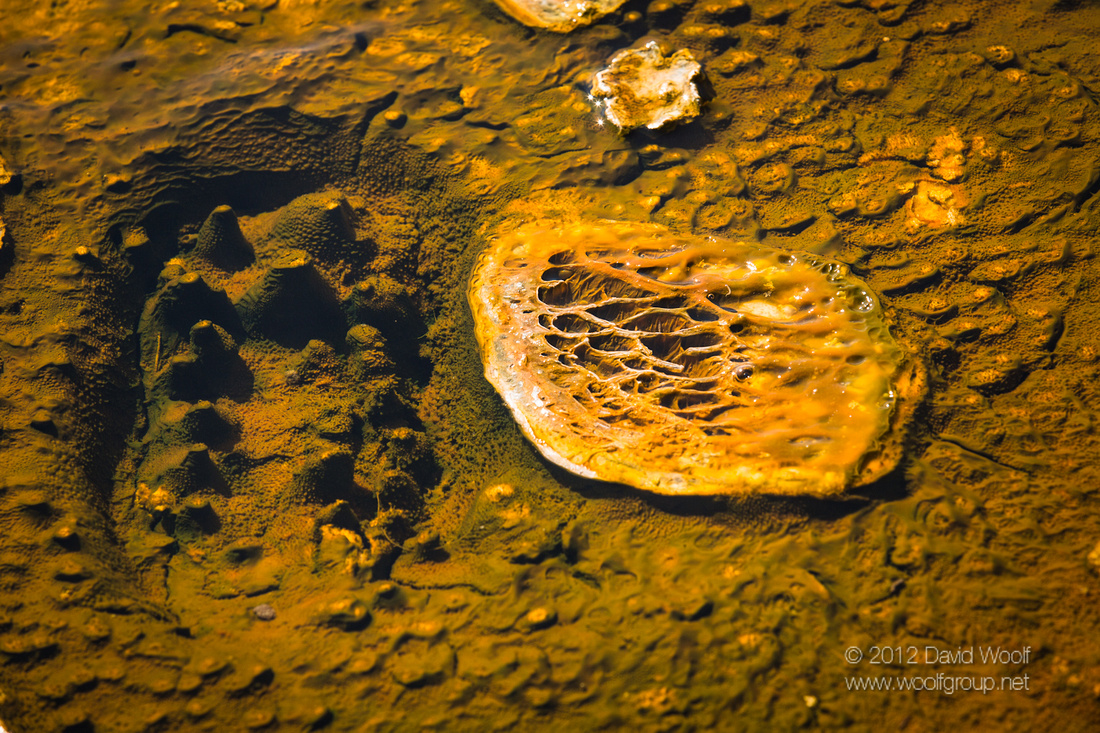 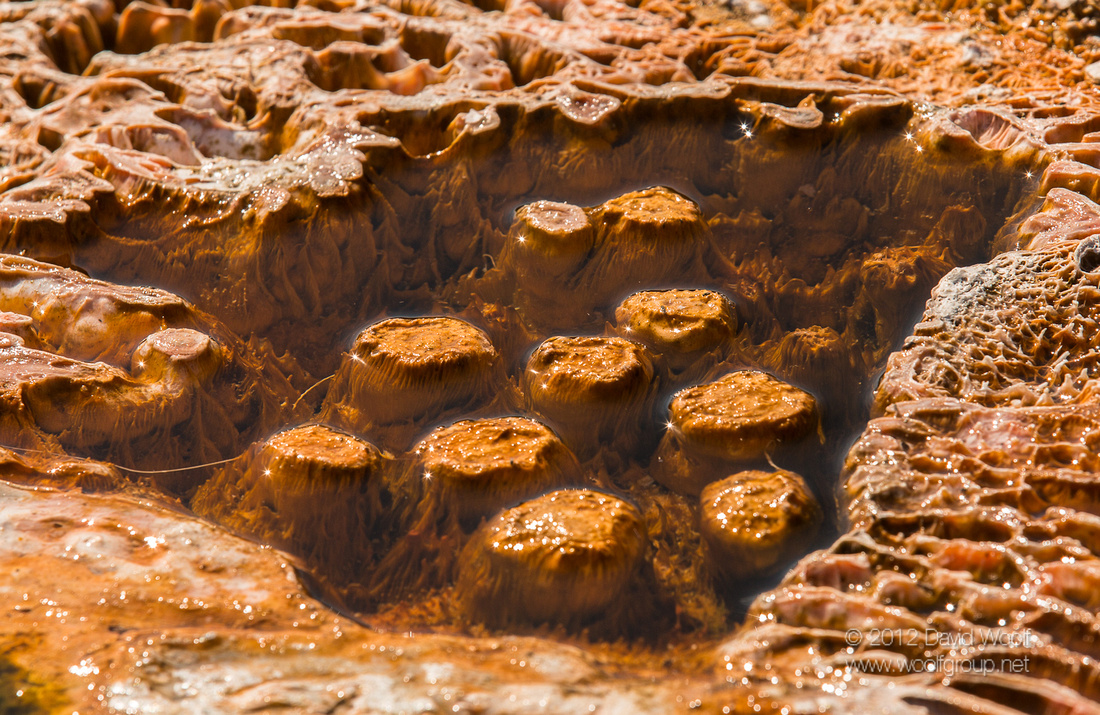 The second of the two basins, Biscuit Basin. 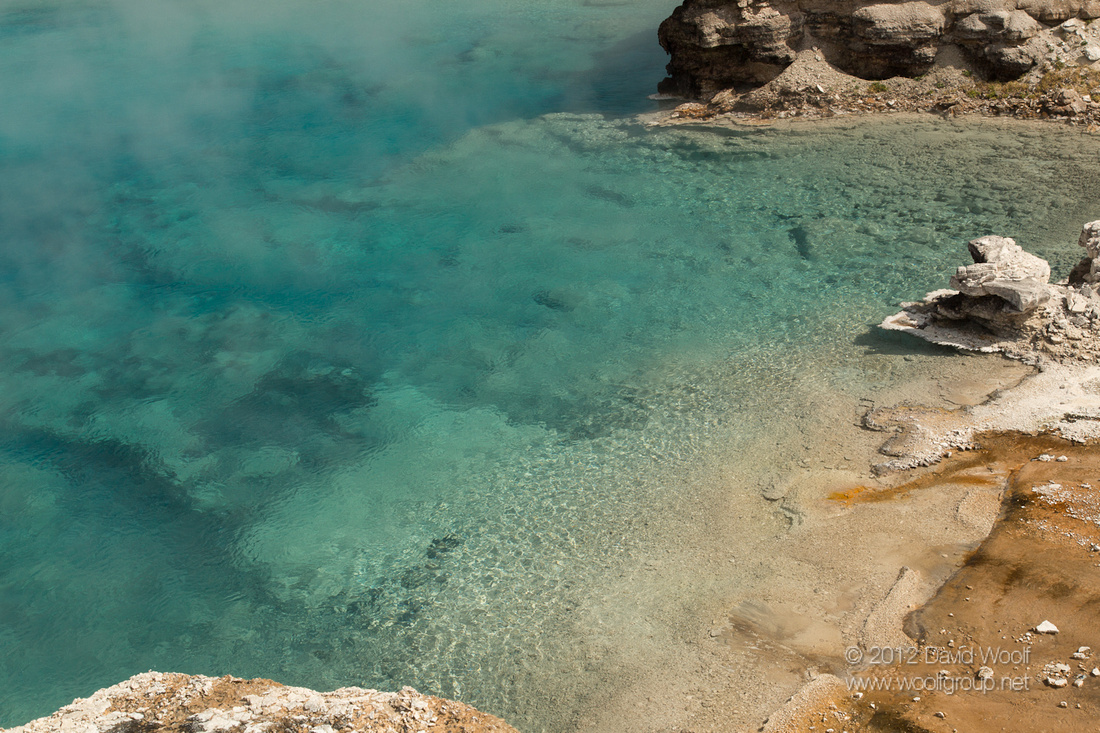 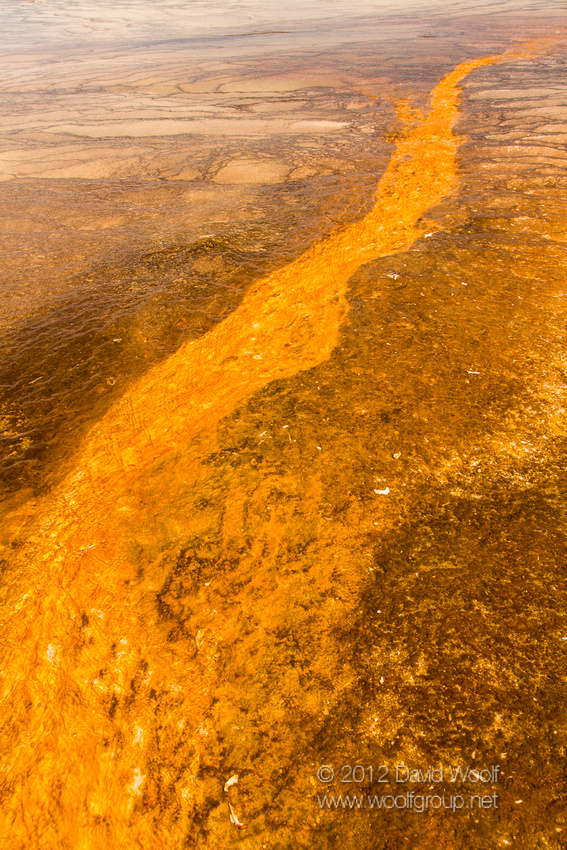 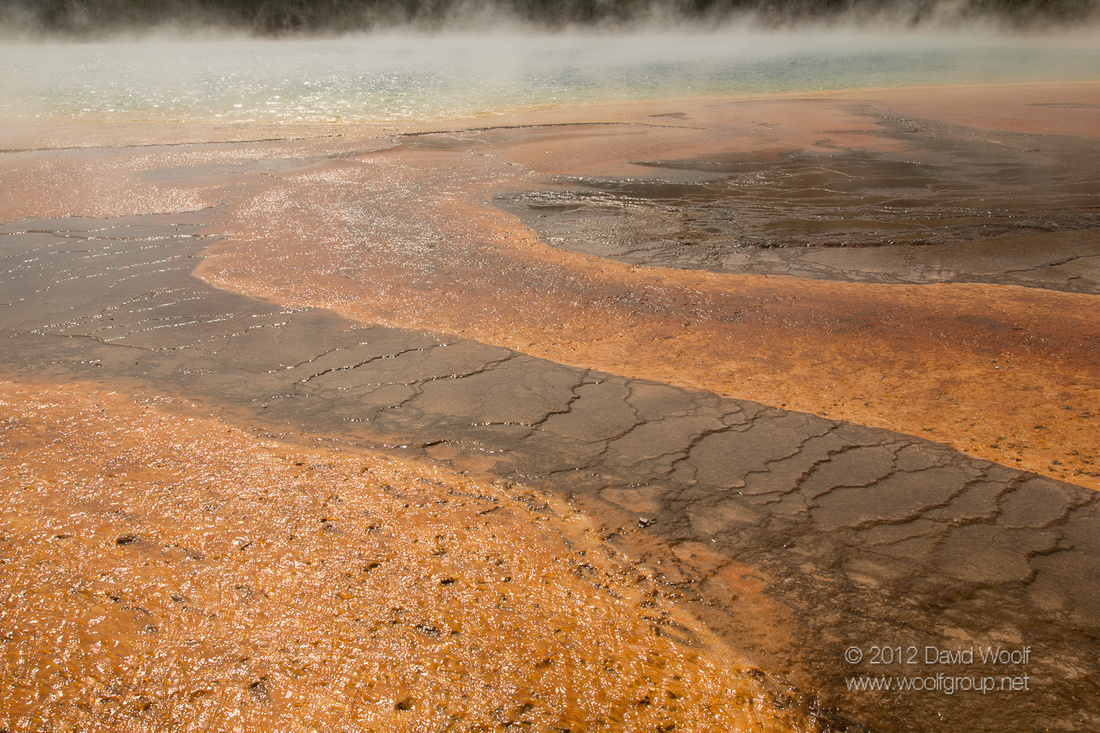 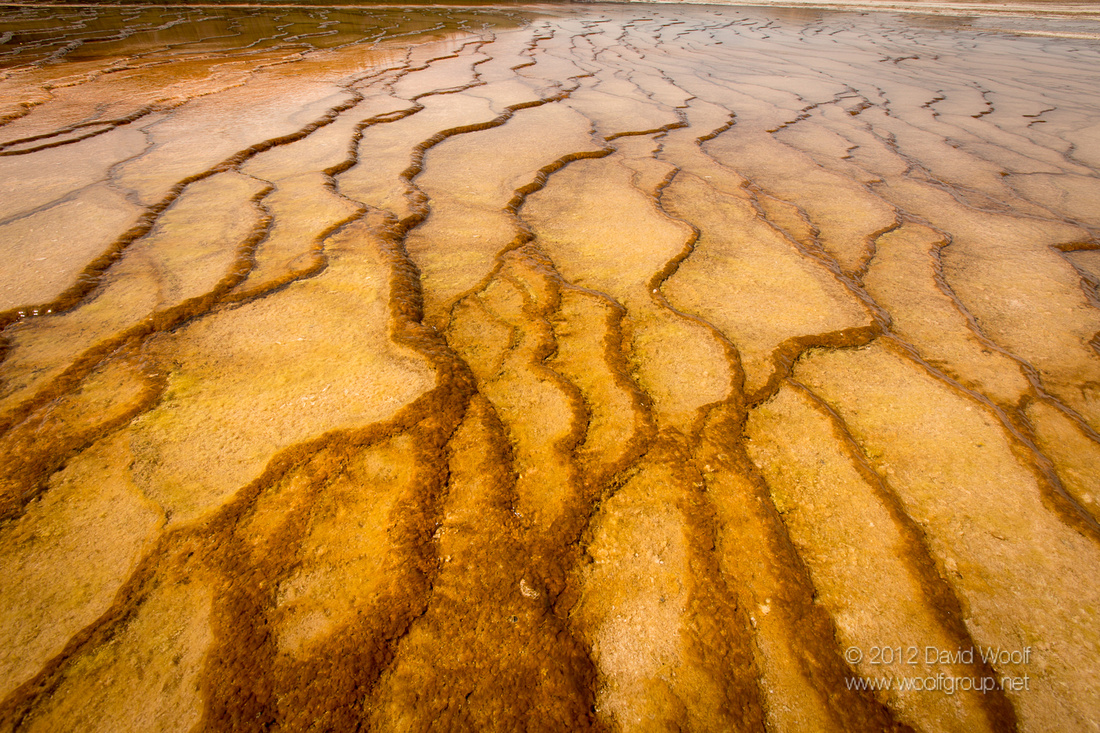 We came upon an accident where the person in front had stopped for a buffalo and the person behind rear-ended him. They were on the side of the road exchanging information, no more than 10 feet from the buffalo. The ranger came quickly and told them to leave immediately and go up the road to do their business. By this time a good crowd had gathered. (It happens quickly when there are such animals to behold.) We had parked well up the road and I had crossed over to the other side for a shot. The ranger was busy managing the situation, saying things on his loudspeaker like, "People, don't crowd this animal," and "If this animal looks at you, you need to be safely behind or inside a vehicle." I was directly across the two-lane road, shooting away behind a pickup truck, when he turned toward me. I heard the ranger say, "Sir, that animal is looking right at you. You need to be behind that truck NOW." (emphasis his) 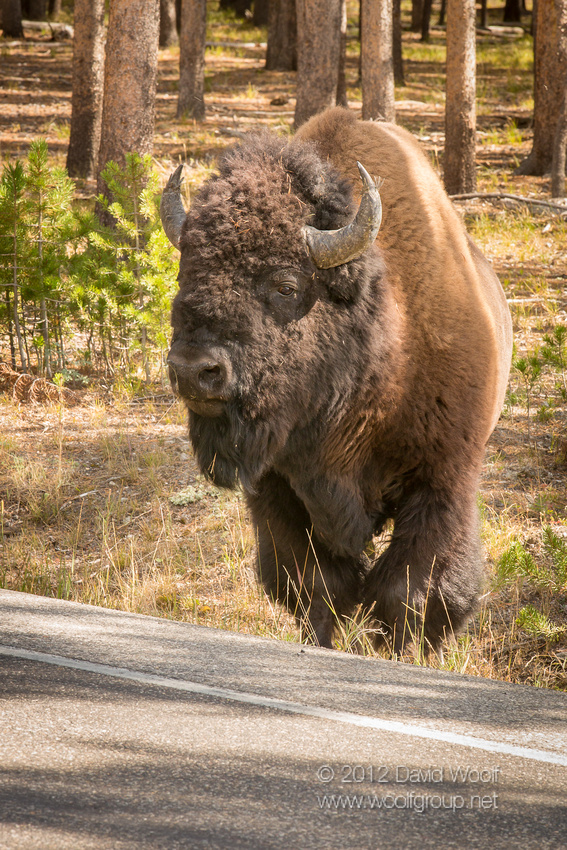 So I walked up to the passenger side of the truck and introduced myself to the driver, who was also watching the drama unfold. The buffalo started to amble across the road. No big deal. Then the driver said, sorry but I need to go now. I said, "Could you maybe wait just a second, cus right now you're the only thing between me and that buffalo 30 feet away." Since she was being so very accommodating, I asked if she would mind rolling down the window behind her. She did, and I got this shot through the two windows of her truck. At this point, the ranger kind of herded the beast across the street (while I was keeping the truck between me and him) and he took off through the woods on the other side. Shows over; on the next thing. 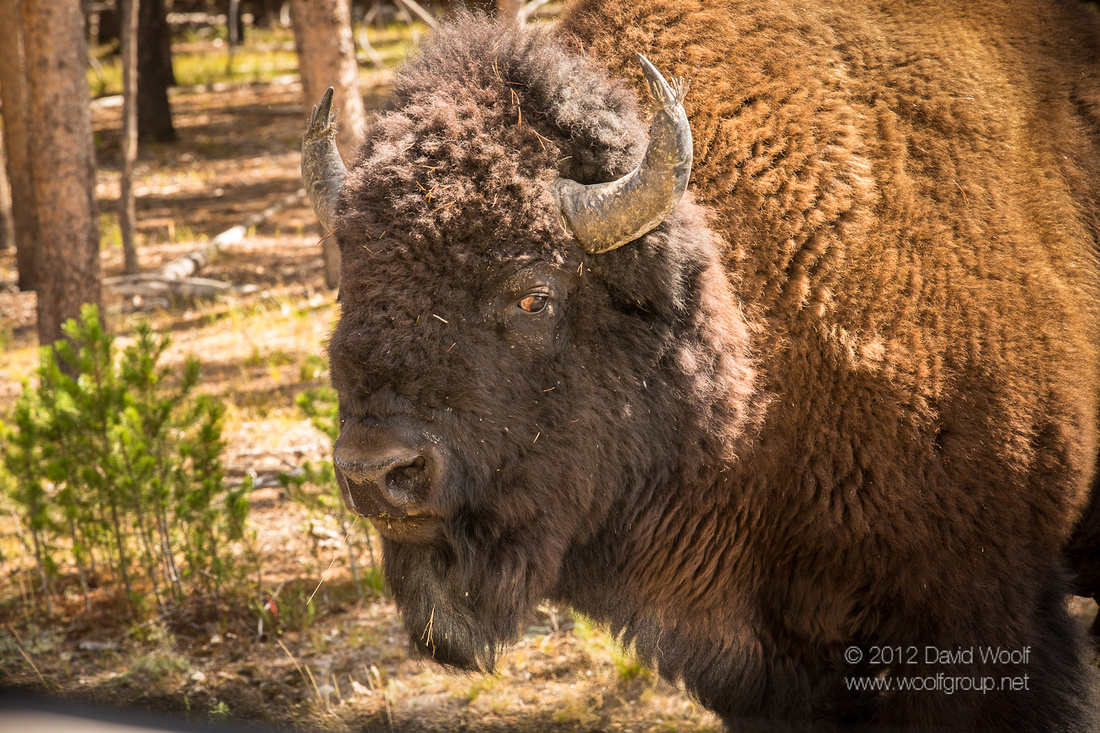 By this time, it was almost 2:00 and a couple of our guys were diabetics and needed to eat. The most direct route to food was to turn out of the park loop and head east about 20 miles to a town outside the park. I was a bit disappointed that we had to take this substantial detour, but not for long. We came upon a group of female elk - nine of them. Grazing in the grass and wondering down the river. There was an instant traffic jam with people pulling off and others just stopping to gawk. Two rangers quickly showed up and one kept the cars from stopping on the road and the other managed the people. This one is obviously being tracked. 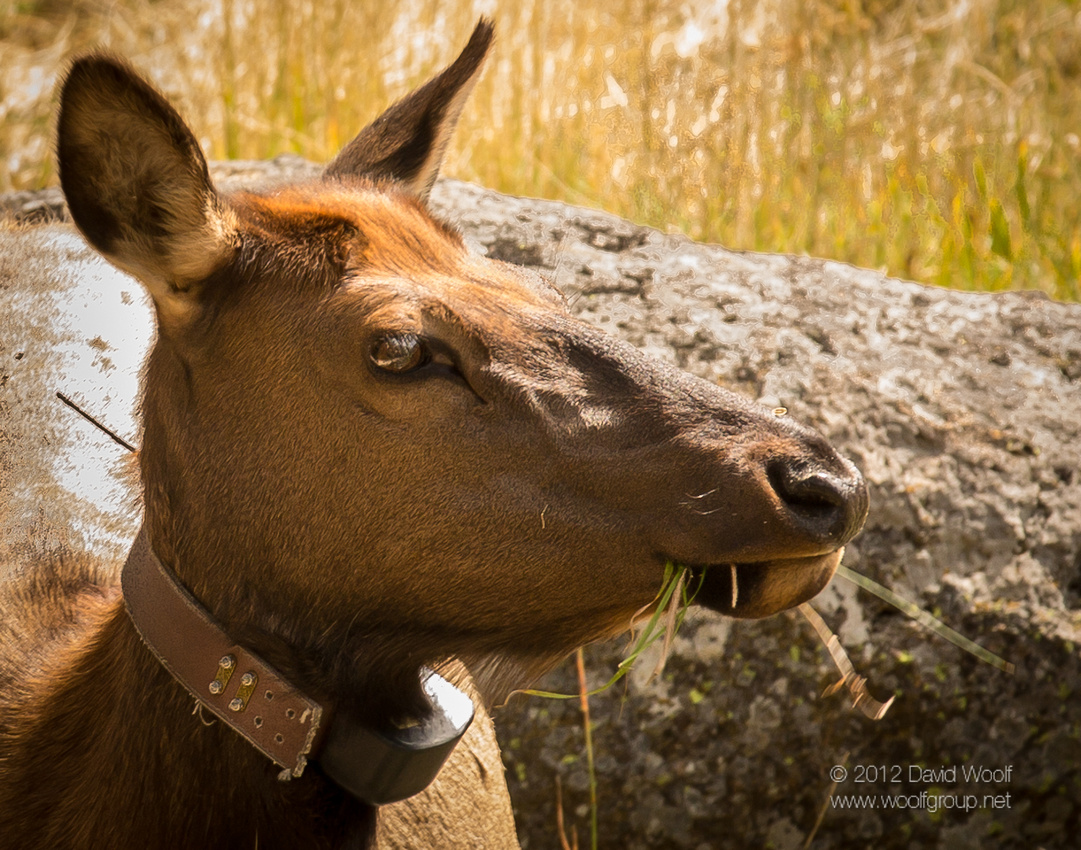 A mom and baby were separated from the rest of the group and moving up the road while the others were moving down. I probably shot 100 photos of these guys. They kept coming my way and I kept backing up. (The rule is to stay a minimum of 25 yards away from the animals.) The people ranger was very nice told me how long I could stay put and when I needed to move back. 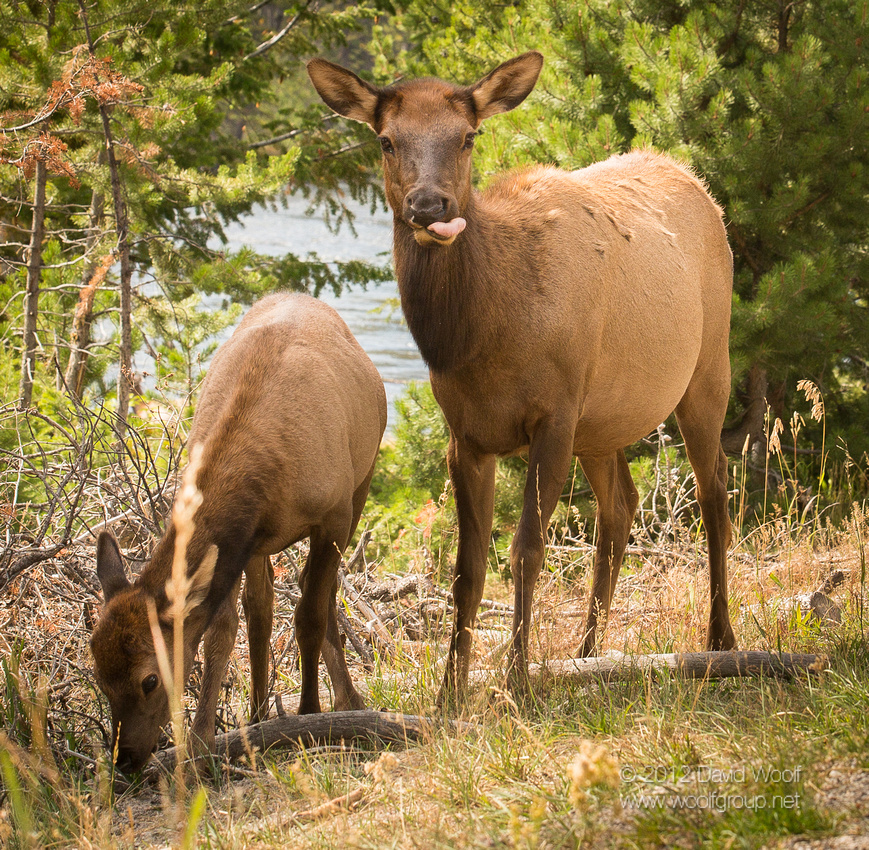 All together, there were nine females. The ranger explained that they were a harem. They "belonged" to a male who was in the woods on the opposite side of the river. They were two weeks away from their estrus cycle (the elk term for being in heat) and the male elk, while mostly hidden, was keeping a close watch over them.

The big guy appeared for a few seconds and thankfully the person next to me pointed and told me where to look. I could tell you this shows off my wildlife photography prowess, but it was pretty much a Hail Mary - a quick lucky shot before he disappeared again. 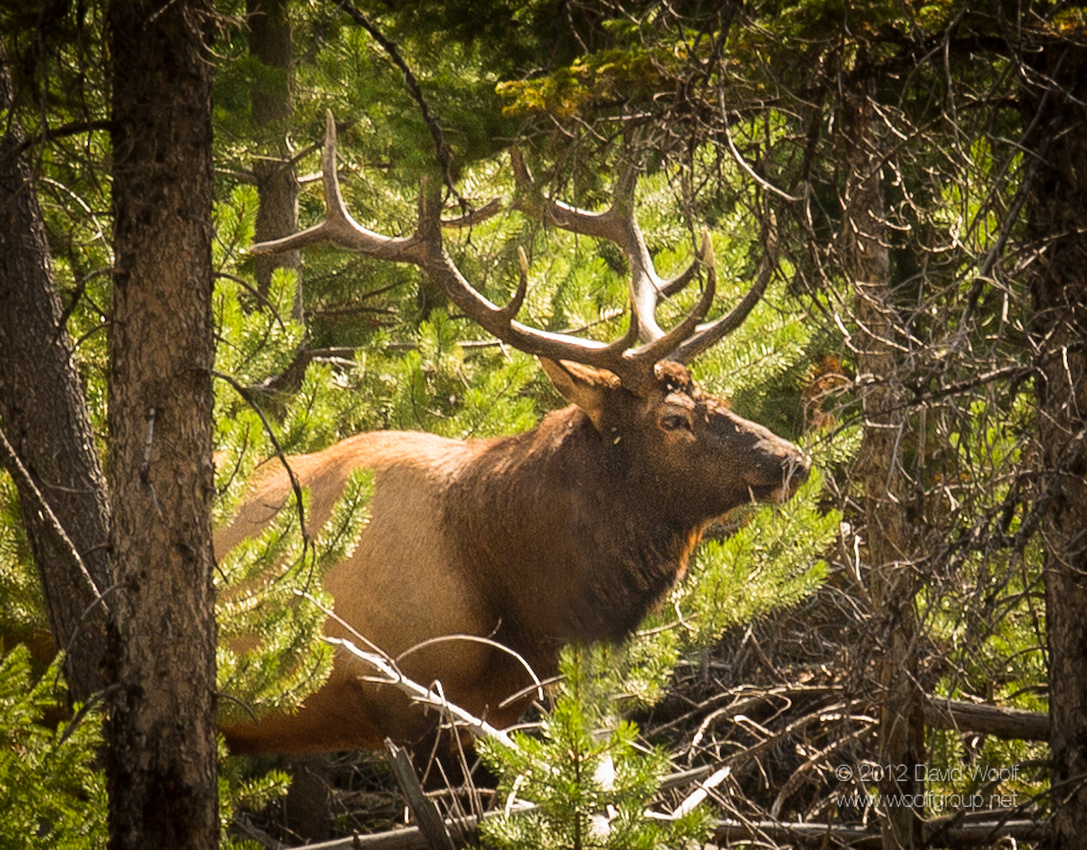 By the way, when we returned from lunch about 90 minutes later, the females were still there, farther downstream, still drawing a crowd.

I was determined to get at least one shot of some water falling off a rock. Firehole Falls served the purpose nicely and did not disappoint. 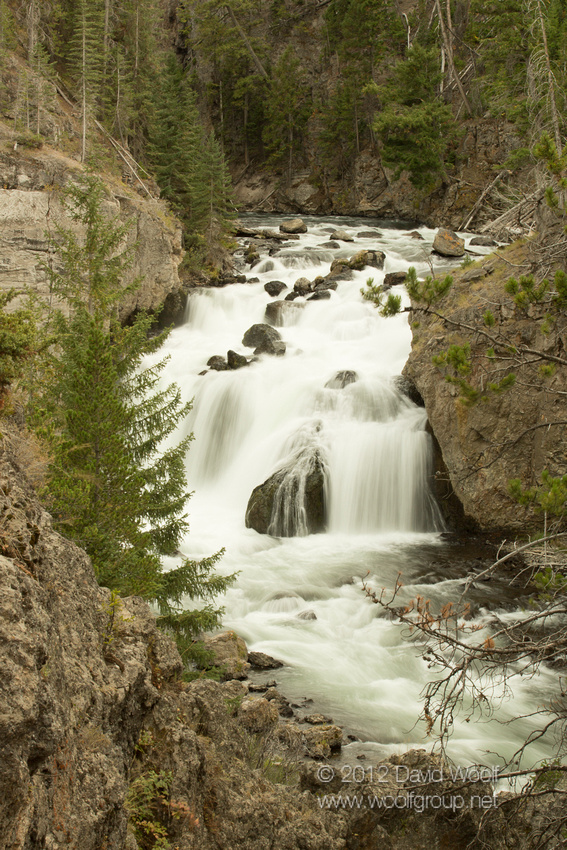 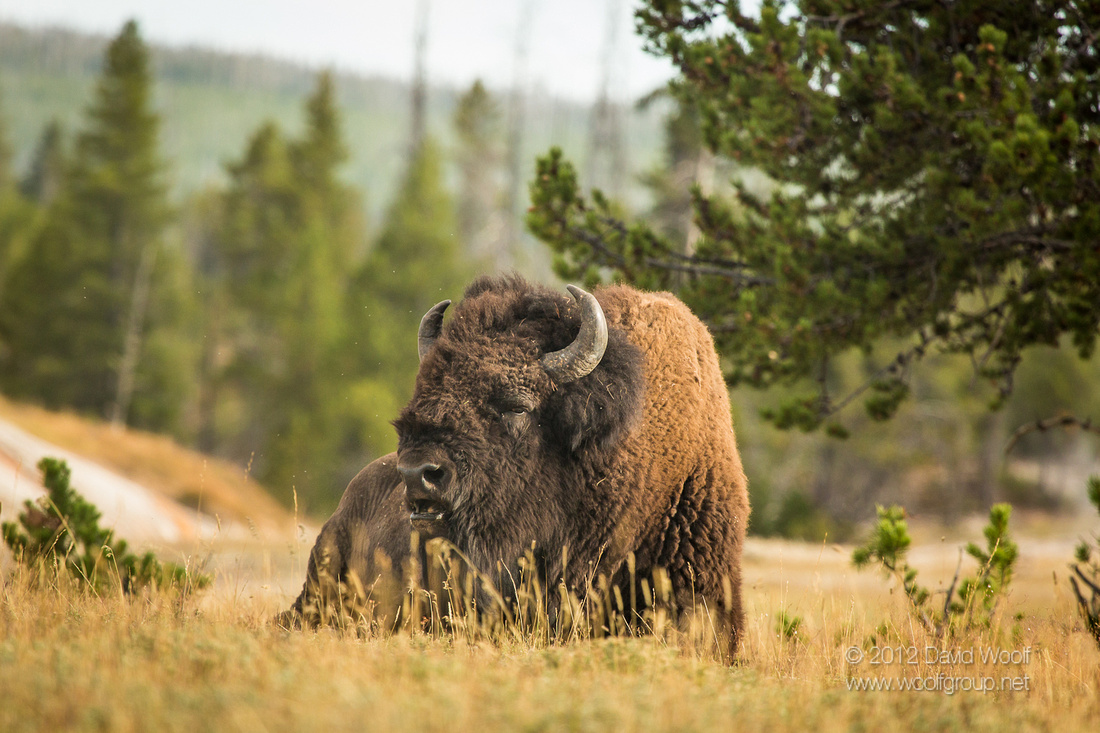 All photos © David Woolf. Thanks for looking!